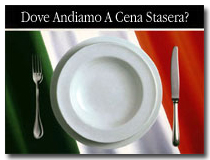 The culture of a country? It can also be measured at the table.


Often, in American films, people go home and do not prepare dinner and do not set the table. Each person opens the refrigerator, grabs something cold, throws himself on to the sofa, switches on the television and starts eating and drinking directly in front of the box.

One has a clear impression that food doesn' t interest him at all, and neither do the other people. This habit is spreading in Italy as well . Some consider it a leap forward, an expression of greater autonomy, of greater emancipation . I have serious doubts. In reality, that way of eating is a clear sign of social disintegration, of anomie. Food has ceased to be a value as much as it has ceased to be a unifying ritual.

Eating is still considered important in Italy. Even the most unassuming restaurant presents a table set with a clean table-cloth, plates, knives and forks, goblets. But also at home, many have the habit of preparing the table. Even if only two people have to eat. Then, they talk about food, they comment it, they compare it , they judge it.

Each thing acquires a meaning, a certain depth through culture and history . Once in Australia i roamed around for days on end and I can' t even remember a thing of the landscape that I saw . Because those rocks , those deserts, did not have a history.

Whereas I recall all the details of the landscapes of Egypt , Syria and Morocco , charged with memories. Similarly, I remember having dinner in a small Italian restaurant in Stockholm, chosen by the Accademia Gastronomica Italiana.

I had been invited by Ambassador Solari Bozzi. Some of the members were illustrating the historical and regional roots of the dish that was being served, others were talking about the wines; eventually every - body gave their grade.

Thanks to this initiative the restaurant maintained its traditions and created new dishes. Food is culture and history. Without these, restaurants deteriorate and end up serving, as Italian food, cold, over-cooked pasta and ten-centimetre-high pizza with Dutch cheese.

A people who do not know their history disappear. The Jews survived the most terrible trials because each and every individual learnt to bear witness to his community.

Each individual is acquainted with the history of his family, he knows from where it came, which stages it went through, he remembers his family ties, he hasn't forgotten the persecutions suffered.

Only the nobles recall their genealogical tree in the same way. However, they do not have the unanimous memory of the Jews, and such a strong sense of solidarity.

The second thing that saved the Jews was the conservation of their customs. After the destruction of the Temple, wherever they were, in the middle of any people, they continued to respect the Torah's meticulous rules.

Many believe that the memory of the past and the conservation of rituals means putting a brake on creativity. This is not true. We become creative only when a thing interests us profoundly, in a vital manner.

Pleasure, taste, beauty, are essential to us Italians.There fore, food is important.Not only the ingredients , the packages we buy at the supermarket , but also the way we set the table , the table-cloth, the plates , the porcelain , the way we cook, serve and eat . It is only against this social , aesthetical , cultural and " tasty " background that we can assimilate the experience of other countries , other cultures , create new dishes , invent . Only in this way can we became capable of creating our own gastronomy and our own food industry .